The Voices of Kosovo in Manchester (VOKIM) Archive is a collection of oral history recordings and accompanying resources curated by the Manchester Aid to Kosovo (MaK) charity. MaK began the VOKIM project in 2014 as an oral history project to document and preserve the history of the Kosovar community in Manchester.

“In 1999, the most serious humanitarian crisis in Europe since World War II erupted in the Balkans. The persecution of ethnic Albanians in Kosovo forced thousands of dispossessed survivors into refugee camps.  Recovery, healing and, for some, the path to justice, would take place in Manchester. Over 2,000 Kosovar ethnic Albanians, classified as the most vulnerable refugees and their families, were airlifted to Manchester in an unprecedented British evacuation programme.’ 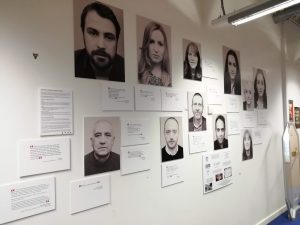 The VOKIM Archive contains personal witness stories of `escalating violence, terror, exodus, and refuge in Manchester.’  The Archive represents an educational and research resource incorporating original audio recordings collected between 2014 and 2017 undertaken in both Manchester and Kosovo plus transcripts of the voices of Kosovan refugees to Manchester from the ethnic cleansing in the Balkans alongside a selection of the voices of the many people who contributed the humanitarian assistance in the Balkan region.  Additionally, the Archive includes pen sketches and summaries, portraiture, plus extra materials designed for schools.

The VOKIM physical archive is now hosted by us at the Refugee Archives at the University of East London; the Ahmed Iqbal Ullah Race Relations Resource Centre at the Manchester Central Library; the Imperial War Museum in London; and the National Library of Kosovo in Pristina.

The VOKIM website is also available which provides online access to the oral testimonies and educational resources at www.vokim.org/the-story-so-far.html

Manchester Aid to Kosovo (MaK) was founded in 1999 in response to the ethnic cleansing of Kosovan Albanians in the during the Balkan Conflict.  2,400 Kosovan refugees were evacuated to crisis reception centres in the North West of England.  MaK is now a registered charity supported by volunteers with a focus on issues of justice of justice, human rights and equality. MaK aims to support recovery and development in Kosovo through a range of engagement activities.

Following their evacuation to Manchester in 2000, some of the Kosovan children asked MaK to establish a Peace Park in Kosovo.  The 22-acre Manchester Peace Park in Podujevë, Kosovo was subsequently established in collaboration with organisations including the Eden Project.  MaK continues to engage and work on educational, sporting, art and music activities in both Manchester and Kosovo.

If you are interested in the role that oral history can play in the documentation and preservation of the life history narratives of migration, explore our Oral History Society Migration Special Interest Group.