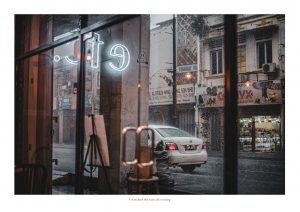 One of the poignant photos from the 20/20 collection that is available for sale on the Living Refugee Archives website.

You are all cordially invited to

This virtual exhibition is an intimate portrayal of life, people and landscapes. 20 copies of 20 photographs in the year 2020. Amin Kamrani, the creator and photographer of the project is now selling these photos with 25% of the proceeds to go to refugee and vulnerable communities in Malaysia. Refugee Living Archives is hosting the virtual exhibition with an option to buy the limited edition prints from the 1st October.

Amin Kamrani has worked alongside many of the refugee communities with local NGOs as a volunteer or as a community translator, as well as a photographer in Kuala Lumpur over the past 5+ years. The 20/20 limited-edition photo print project began in the early days of the COVID-19 pandemic lockdown in Malaysia. As Amin notes, there was no choice but to stay within the confines of home, looking through his photographs which were taken outside the four walls encasing him.

‘While this crisis has affected our perspective of many things in the world, I felt my frames of the outside have now found a new meaning when they were viewed from within. It was then that I thought: it’s time to set up a way for others to have these frames in their homes too.’ 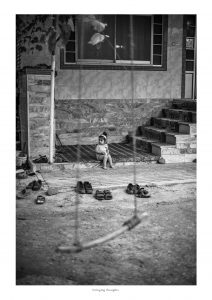 A private moment captured, revealing how the smallest of us have great emotion.

In our exhibition, you will see the photographs accompanied by lines of poetry. This literature offers a chance to hear the voices of people unheard. Words from famous authors, some of whom are refugees themselves, express the daily nuances of emotions that are often overlooked. However, these lines should not define the stories of the frames, rather be read as moments of emotion and experience to be felt by the viewer.

Amin’s active engagement with refugee communities in Malaysia has been important in his decision to use his photography as a platform to facilitate a visual dialogue. The experiences and perspectives he gained from his volunteerism with refugee communities have proved to be a source of creative and intellectual inspiration. Over the years this has meant Amin had the opportunity to build important and meaningful friendships. For this reason, he has committed to share 25% of the proceeds with some of the most vulnerable communities in Malaysia affected by the COVID-19 crisis. In a later blog update will we outline how these proceeds have been used to support grassroots-driven refugee projects.

The 20/20 exhibition is also the springboard for the upcoming Special Issue (temporarily titled) ‘Displaced PhotoVoices in Kuala Lumpur’. Here we hope to combine our collective talents. Amin Kamrani as a photographer, Arifa Sultana as a Rohingya journalist and Kirandeep Kaur as a PhD researcher in Law and Development. We aim to create a visual dialogue with refugee community actors, who are often overlooked or devalued as a direct contrast to the current media portrayal of the same people.

This photovoice project will give a space for these actors to self-direct how they are represented, frame their own stories and resilience in dealing with the current crisis. We will combine participatory research methods with digital storytelling, allowing the refugees and actors on the ground ownership over their own images, voices and lived experiences. In our introductory chapter, Amin Kamrani and Kirandeep Kaur will discuss how this participatory process has worked in dialogue with visual storytelling in the 1st chapter of the special issue. We will highlight the need for this approach in modern-day Malaysia with the current media backlash against refugees and worsening political and financial situation as a result of COVID-19. Our main chapters are dedicated to and framed by the refugee actors themselves where they will reflect on their own agency, the impact of the media (and living in the conditions of crisis) on their lives and sense of self. Working Rohingya, Afghan, Somali and more communities we aim to reveal the hidden lives of most marginalised who are also the most active in creating change & touching lives of others for their communities. Each chapter will be constructed around themes chosen by the participants, with their photos framing the dialogue. In our final chapter, Arifa Sultana and Kirandeep Kaur will discuss the impact of media on the voices of these communities. Reflecting on the images presented in the previous chapters, and aims to contextualise the situation in Malaysia to the wider international context.

We hope you will join us on this journey into the lives of refugees in Malaysia over this next half year and enjoy (and support if you are able to purchase) the poignantly beautiful 20/20 virtual exhibition and the upcoming special issue.

About the Author: Kiran Kaur