Reflections on the EU-Turkey Agreement on the Migration Crisis

Reflections on the EU-Turkey Agreement on the Migration Crisis
by Paul V. Dudman (@PaulDudman).

Image Courtesy of The Greek Reporter.

The recent EU Agreement with Turkey in relation to the managing of migrants in the Mediterranean has resulted in a mixed response from the media.  In essence, the deal that has been reached between the European Union (EU) and Turkey will see migrants and refugees whose application for asylum has been rejected in Greece being returned to Turkey whilst EU countries will look to resettle Syrian refugees currently resident in Turkey, along with the promise of aid and political concessions to the Turkish Government.  Whilst the Agreement has been welcomed by EU heads of state and also by the Turkish Government, there has been evidence of disquiet amongst human rights groups including Amnesty International who question that the main focus of the Agreement to send virtually all migrants deemed to be illegal back to Turkey amounts to the “collective expulsion” of migrants from Greece.

The core focus of the Agreement will be:

There are significant questions however in terms of how practical and workable this Agreement is likely to be in practice, especially given the large numbers of migrants and refugees looking to seek refuge in Greece.  It has been estimated by the BBC, that “since January 2015, a million migrants and refugees have entered the EU by boat from Turkey to Greece. More than 132,000 have arrived this year alone.” (BBC News – Migrant crisis: Amnesty hits out at EU over Turkey deal.) The basis of the Agreement reached between the EU and Turkey is to return illegal/unwanted migrants (refugees and asylum seekers) from the Greek islands to Turkey and to allow for genuine asylum seekers to transfer from Turkey to Europe. The plan depends on Turkey maintaining its status as a “safe” country given the Turkish Government’s rather chequered human rights record and the fact that Turkey has yet to fully commit to the UN Refugee Convention and has in the past undermined international law by returning refugees to Syria.  Equally, whilst new Turkish labour legislation has in theory facilitated access to paid employment, in reality this does not in practice guarantee refugees access to genuine employment and many refugees in Turkey have to work illegally just to try and make ends meet.  The new legislation in Turkey only allows for those Syrians who have the full support of their employer to apply for a full work permit, and for many refugees, their employers will not provide such guarantees.

An example of a Syrian refugee named Frayha was highlighted in a recent Guardian article, “Since his landlord won’t give him a rent contract, [Frayha] can’t apply for a certain kind of ID card, known as the kimlik. Without the kimlik, he has no chance of a work permit.  As a result, Frayha has been left in legal limbo that he says undermines the EU’s designation of Turkey as a “safe” country for refugees.” (The Guardian – Syrian refugees still aim for Europe as leaders finalise EU-Turkey deal). 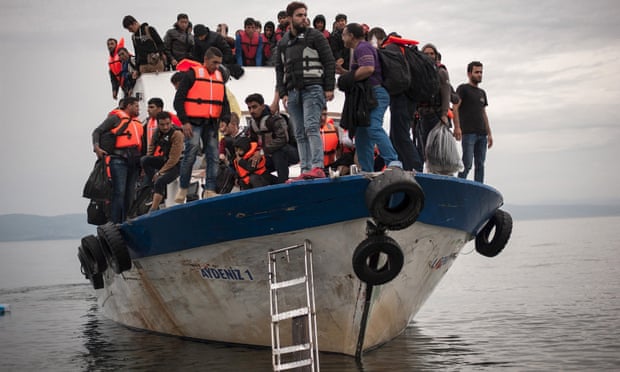 Refugees arrive from Turkey on the Greek island of Lesbos. Photograph: Fotis Plegas G/Reuters. Courtesy of The Guardian.

asylum case backlog.  However, there is evidence to suggest that the Greek asylum system is already unable to cope with the number of asylum cases it is having to deal with, with some asylum seekers having to wait up to 13 years for their cases to be heard, so it is perhaps fair to question how the agreement for rapid returns of failed asylum seekers from Greece to Turkey will actually be possible within the current Greek system, especially given “as of September last year, Greece had 23,000 pending appeals for applications filed before June 2014.” (EUObserver – Greek asylum system is broken cog in Turkey plan).  With an additional 35,000 people stranded in Greece after the recent closure of the Western Balkan borders and a further 2,000 migrants arriving from Turkey each day, there are big questions as to how effective this Agreement can be.

One of the arguments in support of this Agreement has been the idea that it would be an effective tool in the fight against the trafficking of persons to Europe and that it would significantly undermine the economic conditions that have enable the traffickers to develop, refine and expand their lucrative business model.  The refugee and migration crisis we have witnessed in the Mediterranean over the last several years only goes to highlight the failure of existing EU policies in trying to counter both the illicit trade in human beings and to provide a humane and safe refuge for those forced to leave their homes and to seek to make such perilous journeys in the hope of starting a new life in Europe.  The failures of anti-migration rhetoric, naval patrols and the tightening of borders to help stem the rise of human trafficking, only goes to highlight the endemic failure of EU politicians to address the core issues at play in this situation.

Indeed, a recent article in The Guardian entitled “David Cameron: send more patrol ships to turn back refugee boats in Libya” further reflects on the continued failures in countering both the business model of the people smugglers and the real reasons why so many people are being forced to flee.  Kevin Watkins, Director of the Overseas Development Institute, highlighted in news article in The Daily Telegraph, that the current EU deal with Turkey will not have the desired effect of helping to break the trafficking gangs.  “The “business model” of people smugglers is built on an imbalance in supply and demand. Simply stated, the number of asylum seekers and other migrants driven to Europe by fear, hoe and aspiration greatly exceeds the number allowed in, creating a market for intermediation served by trafficking.” (The Independent – Why don’t EU leaders realise that this refugee deal with Turkey is exactly what the people traffickers want?).

Libya is a clear example of the existing failures in responding to the needs of why so many people are being forced to flee.  Libya is still a country in turmoil with four different factions claiming leadership of the country.  The political situation within the country is therefore extremely unstable at best and according to Professor Brad Blitz from Middlesex University, “Libya is a country that is divided, which cannot guarantee human rights, which has produced hundreds of thousands of displaced people … If the concern is to prevent deaths, as [Cameron] has said, then really he should be promoting safe passage, rather than diverting people so that they have to seek longer and more dangerous routes.” (The Guardian – David Cameron: send more patrol ships to turn refugee boats back to Libya).

The UN High Commissioner for Human Rights, Zeid Ra’ad Al Hussein, has expressed his concern over the dangers that the EU agreement with Turkey could lead to “collective expulsion” if individual cases for asylum and refugee status are not handled correctly.  Citing “a contradiction at the heart of the agreement,” the UN High Commissioner argued that “if the safeguards [in the agreement] are to be considered real, then the individual assessments must allow for the possibility that the persons in question will not in fact be returned.  Otherwise it could still qualify as a collective expulsion.” (UN News Centre – UN rights chief concerned over ‘collective expulsion’ of migrants after EU-Turkey deal).  Within the provisions of the EU-Turkey agreement, individual cases need to be processed under the EU Asylum Procedures Directive and details that in situations where migrants have either not applied for asylum or for whose applications has been deemed inadmissible or unfounded under the regulations stated in the Directive, these individuals should be returned to Turkey.

Zeid Ra’ad Al Hussein stressed the importance of continuing to respond to these asylum cases in a humane manner and to ensure that the cases are dealt with and to ensure that human rights law obligations are not overlooked.  Indeed, the human rights implications of this Agreement are also a concern to the UNHCR, who confirmed on the 22 March 2016 that they are “not a party” to the provisions agreed by the EU and Turkey.  Prior to the Agreement coming into force, UNHCR had been working with the authorities in Greece supporting the so-called “Hotspot” areas on the Greek islands.  As a consequence of the EU-Turkey deal, these “hotspots” opposing mandatory detention, and has taken steps to scale down certain operations on these islands.  “UNHCR is not a party to the EU-Turkey deal, nor will we be involved in returns or detention” (UN News Centre – UN refugee agency redefines role in Greece as EU-Turkey deal comes into effect) a statement said although UNHCR will continue to help the Greek Government in developing an adequate reception policy.  UNHCR will redefine their work to ensure that refugee and human rights standards are being upheld, especially given concerns that Greece does not have sufficient safeguards in place in order to be able to effectively assess the number of asylum claims that they will be required to deal with, and there are also concerns they lack the capacity to be able to offer suitable accommodation to house these refugees and asylum seekers humanely.

Details of the official EU publications detailing this Agreement can be found as follows:

UNHCR – Syria conflict at 5 years: the biggest refugee and displacement crisis of our time demands a huge surge in solidarity http://www.unhcr.org/56e6e3249.html

The Telegraph – The EU deal with Turkey is fraught with dangers http://www.telegraph.co.uk/news/newstopics/eureferendum/12196086/The-EU-deal-with-Turkey-is-fraught-with-dangers.html

The Guardian – Refugee crisis: What does the EU’s deal with Turkey mean? http://www.theguardian.com/world/2016/mar/18/eu-deal-turkey-migrants-refugees-q-and-a

Human Rights Watch – Dispatches: On the Ground in Greece, with the Refugee Crisis https://www.hrw.org/news/2016/03/17/dispatches-ground-greece-refugee-crisis

The Independent – Why don’t EU leaders realise that this refugee deal with Turkey is exactly what the people traffickers want? http://www.independent.co.uk/voices/david-cameron-dont-you-realise-that-this-eu-turkey-refugee-deal-is-exactly-what-the-people-a6939126.html