Skip to toolbar
Skip to content
Home/Archives/Rohingya refugee crisis: ‘The bodies were thrown out of the boat’
Previous

Rohingya refugee crisis: ‘The bodies were thrown out of the boat’

Rohingya refugee crisis: ‘The bodies were thrown out of the boat’

By Swaminathan Natarajan and Moazzem Hossain for the BBC World Service.

This article was originally published on the BBC News website and is available online here:  www.bbc.co.uk/news/world-asia-52832841.

On behalf of the Living Refugee Archive, we would like to thank the BBC Permissions Team for granted us permission to re-post this news story on our site.  Please note, this is republished on condition that it will be used in a Not-For_Profit manner which we fully support and adhere too. 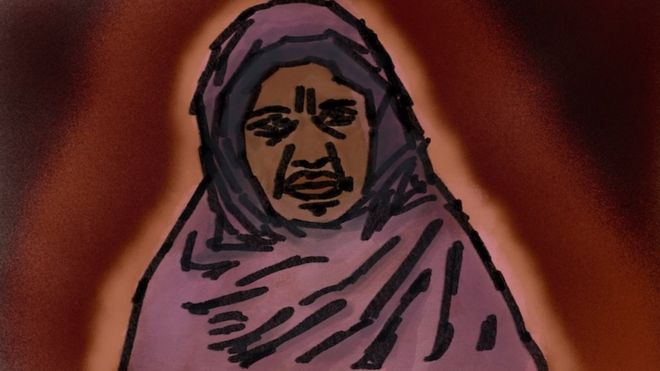 Khadiza fled Myanmar after her husband and son were killed. Illustration by Lu Yang.

“Nobody knows how many people have died. It could be 50 or even more,” recalls Khadiza Begum.

The 50-year-old was among 396 Rohingya Muslims who had tried to reach Malaysia but who finally returned to the Bangladeshi shore after the boat carrying them was stranded at sea for two months.

Her estimate on the number of deaths comes from the funerals her son officiated as an imam, a Muslim preacher, on the same boat.

The human smugglers never delivered them to their longed-for destination.

Khadiza had to run away from her home in Myanmar because of violence that UN investigators described as a “textbook example of ethnic cleansing”.

Neighbouring Bangladesh gave her shelter, settling the fleeing Rohingya Muslims in what has now become the world’s largest refugee camp.

Around one million Rohingya are housed in Cox’s Bazar in Bangladesh, and some among them, like Khadiza, hold dreams of a better life in Malaysia, lying across the Bay of Bengal. 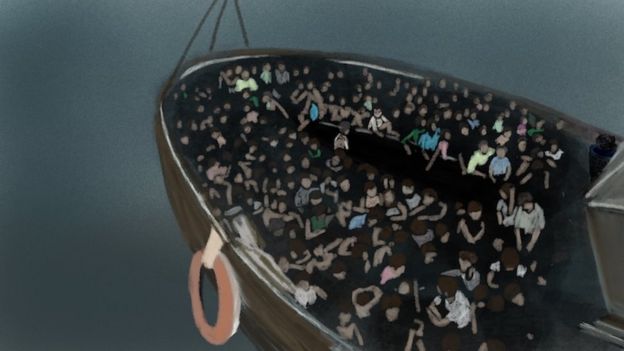 The refugee boat was carrying people to Malaysia. Illustration by Lu Yang.

But in Khadiza’s case, the dream turned into a nightmare.

She recounts how the crew – the human traffickers – tried to conceal deaths on their crowded boat.

“They would run both engines so that none could hear the sound of splashing water when bodies were thrown out.”

Often, she says, the bodies were disposed of during the night: “I know for sure at least 14 to 15 women died.”

The death of a woman who was sitting next to her continues to traumatise Khadiza. Severely dehydrated, the woman was initially disoriented and behaving strangely. The crew took her to the upper deck of the boat, where Khadiza says she died.

“I am still haunted by her death. She died in front of our eyes.”

The woman had four children with her. “My son informed the eldest daughter, just 16 years old, that her mother had died.”

“The woman’s three other children didn’t know what happened to their mother.” she says. “They were crying. It was heart-breaking.

“The body was immediately thrown out.”

Khadiza is a mother of four, too. She was made homeless and stateless in 2017 after her husband and one of her sons were killed during army operations in the Rakhine state of Myanmar.

Her village was torched, forcing her to go to Bangladesh to settle in the Cox’s Bazar refugee camp with her children.

After marrying off her eldest daughter, she craved to provide a better life for her remaining son and daughter. “We had a tough life. I didn’t see any future for us in a refugee camp.”

Stories she heard about the Rohingya who crossed the sea to Malaysia for a better life fascinated her. Khadiza sold her jewels and put together $750 (£610) to pay to traffickers who would arrange a boat for them.

Then one night in February, she received the phone call she had been waiting for.

She kept her intentions secret and bundled some clothes and gold jewels in a small bag. “I told my friends and neighbours that I would be going away for medical treatment,” she tells the BBC.

With her son and daughter in tow, Khadiza locked their home and slipped away in darkness.

A man met them near a bus stand, guiding them to a farm house where she saw hundreds of others.

The group was taken to a boat that slowly set sail in the Bay of Bengal, between the Saint Martin’s Island in Bangladesh and Sittwe in Myanmar.

“I had been planning for months. I wanted a better life. I was dreaming of a new life in a new country,” she says. 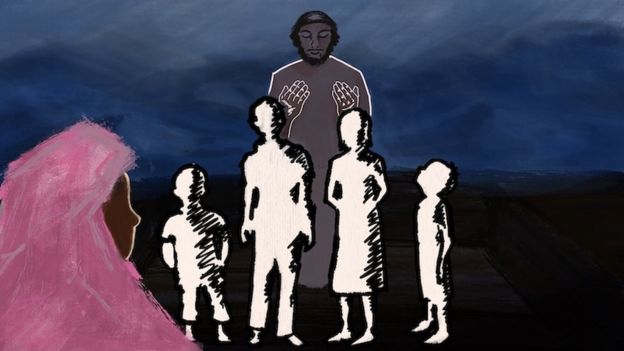 Khadiza’s son officiated the funerals of those who died on board. Illustration by Lu Yang.

After two days they were transferred into a another boat: a bigger one, full of people.

Khadiza says she didn’t even have room to stretch her legs: “There were families with women and children. I think there were more than 500 people.”

The boat was larger than a typical trawler used in South Asia, but certainly not big enough to carry so many people.

Crew members stayed on the upper deck, women were given the middle deck and men were pushed to the bottom. Ironically, the crew were Burmese men from Myanmar – the country from where the Rohingya were forced out.

“At the beginning I was scared,” Khadiza remembers. “I didn’t know what our destiny would be, but as we settled in, I started dreaming again.

“I thought we would achieve a better life. So whatever troubles we were going through did not matter.”

The boat lacked basic facilities like water and sanitation. Khadiza washed herself only twice in two months by drawing water from the sea, in front of others.

Toilets consisted of two wooden planks with a hole in the middle.

“A few days after we started our journey to Malaysia, a boy fell through the hole into the sea,” Khadiza remembers. “He fell and died.”

It was the first of many deaths she witnessed. 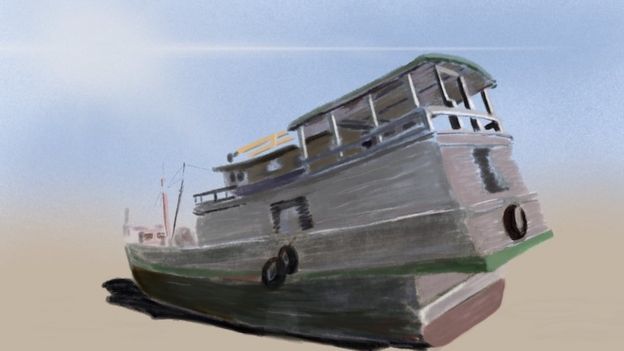 Khadiza believes at least 50 people died during the journey. Illustration by Lu Yang.

After sailing for seven days, sometimes in bad weather, the group finally spotted the Malaysian coast. Here, there were expecting smaller boats to transport them to the land.

The coronavirus outbreak had tightened Malaysian security: with coast guards conducting more frequent patrols, making it difficult to sneak in the country.

The captain told the refugees they would not be able to land in Malaysia. Khadiza’s hopes had been shattered by the pandemic.

The crew had to retreat, but faced a shortage of food and water.

On their way to Malaysia the refugees had been given rice twice a day, sometimes with lentils, and a mug of water.

The lack of drinking water was becoming unbearable.

Khadiza says that, in desperation, some of the refugees even drank seawater: “People would try to quench their thirst by soaking clothes in water, then wringing it get the drops in their mouths.”

Days later, off the coast of Thailand, a small boat arranged by the human traffickers brought in much needed supplies.

But, while they were waiting for another chance to get to Malaysia, the Burmese navy intercepted them.

“They arrested the captain and three crew members, but they were released,” Khadiza says. “I guess they made some sort of a deal.”

Their second and last attempt to land in Malaysia was also to end in failure. It became clear to everyone on the boat that they were going nowhere.

“We were drifting around in the sea, with no hope of ever reaching the shore. People were getting desperate. We kept asking ourselves how long we could survive like this.”

So, a group of refugees went up to the crew and pleaded with them to disembark anywhere, regardless of whether it was Myanmar or Bangladesh.

But the crew refused, believing it too risky. They could be arrested and their boat taken away.

As the boat drifted aimlessly in Bay of Bengal, stories accusing the crew of rape and torture started circulating.

“Things were getting out of control,” Khadiza says. “I heard one of the crew members was attacked and killed – his body dumped in the sea.”

There were 10 Burmese crew members overseeing almost 400 refugees. “They realised it would be very difficult for them to fight and win,” she says.

The crew demanded more money to hire small boats which would take them ashore. Those on board coughed up another $1,200.

After a few days, a small boat approached them. Immediately, the captain and most of the crew members jumped in to run away.

Those remaining managed to steer the boat towards Bangladesh, with the help of two remaining crew members. 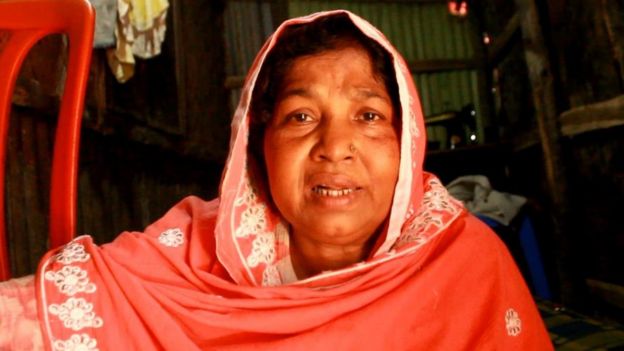 Khadiza Begum is now back in the refugee camp again, traumatised by her experience.

“I was so happy when I finally saw the coast for the first time in two months.” Khadiza remembers.

They were back in Bangladesh again. After seeing the people in such a bad condition, local villagers informed the Bangladeshi Coast Guard.

After spending two weeks in quarantine, Khadiza returned to her refugee camp, only to find out that her place was now occupied by another family.

She has no hope of going back to Myanmar to live again on the land she farmed.

She now has to share a tiny space with her son and daughter.

“I lost everything for my dream,” she says, in quiet contemplation. “Never make the mistake I made.”