Documenting untold resilience and moving memories with displacement: Narratives of asylum-seekers and refugees in Britain

By Rumana Hashem and Paul Dudman

This article discusses the moving and untold stories of people in displacements, especially those who have anchored in Britain from the global South since 2014 and are undergoing the process of asylum or have recently gained refuge and are remaking home, whilst negotiating uncertainties and hostility in their host country.  It reflects on a civic engagement project and a small scale interdisciplinary-oral history research with documented and undocumented migrants from non-EU states in London. In providing an experience-centred narrative analysis we demonstrate that remaking home for non-EU migrants and refugees in the current cli 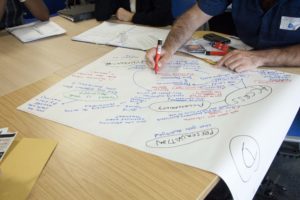 mate in the UK is not only durable but often unattainable. We argue that despite setbacks, these people shape powerful forms of resistance to hostility, simultaneously negotiating uncertainties that can adequately be explored by the use of a bottom up oral history to traditional life history method and combining with experience-centred narrative methodology for analysing displaced narratives.

For the sake of clarity, a bottom-up approach is one within which participants were able to speak about anything they liked, for as long as they liked, could suggest and intervene to research questions and design, and could withdraw when/as they needed to. In one case, a participant suggested changing the topic and refused to answer when she was asked if she was working. The discussion has then changed, and we have switched to a completely different topic in order to allow her space to think freely and reflect on adequately.  Interestingly the same participant has later moved back to the discussion on her working condition and told me that “my employer is cruel. She likes punishing me. She exploits me although she knows that I have severe epilepsy. She makes me overwork. She told me: ‘if you cannot work, then don’t come’. Hmm!” This ordeal is full of trauma though our participant spoke spontaneously as it felt her “released”, in her own wording, in the end of the meeting.  This shows that there was no noticeable power imbalance between the researchers and the participants, and communication was reciprocal.

This blog is a brief summary of the research paper that we jointly presented at a symposium “An unsettled status? Migration in a turbulent age” in July 2019, hosted by the centre for Welsh Politics and Society at the University of Aberystwyth, Wales.  Drawing on our outreach work that we have undertaken with the Refugee Council Archive and the Centre for Migration, Refugees and Belonging at the University of East London in 2015 and 2016, we illustrate how asylum-seekers and refugees themselves resist and continue to debunk the dominant notion of nation through the making of or giving meanings to their temporal and spatial aspects of displacement. For instance, one indigenous and Black-Moroccan participant told that he is deprived of the home he hoped for, “face various forms of exclusions as ‘other’”, yet found London a “safe place to live in.”  London offers him a relatively “better home” as it does to many other refugees who fled their home in the face of religious persecution or gendered violence. His expression of relatively “better home” relates to the temporal aspects of home while he is also concerned about the spatiality of displacement.

He explains how the same “better home”, London, can be hostile to him and other refugees. The concept of a home is relative, hence Shahosh describes that “London is a better place for its diversity, its political dimension, its democratic value. It is of course safer than Morocco for me. But housing situation is terrible. I live in a refugee flat where 6/7 people including unwell persons squeezed in – one Palestinian man got HIV. Also sometime curiosity and fantasy of English people makes me feel like a monkey in the zoo. For example, when people on the high street or at a cafeteria stairs at my curly hair and asks: ‘Is this real? Can I touch your hair?’ It is embarrassing […].”

The question in relation to Shahosh’s different kind of hair is not necessarily posed to him as a humiliation. It may be “extra curiosity of people in this country”. Nevertheless, this is something hard to cope up. Such experience embarrasses Shahosh and reminds him of his different race, ethnicity, and nationality. It makes him feel unwelcome in London as he says that “the concept of home is meaningless to me.”  At the same time, Shahosh and other participants form apt resistance alongside debunking the meta-narrative of Britain as a host nation to immigrants.

During our conversation about British values and refugees integration in the UK the same participant from Morocco told that “There’s nothing called ‘British values.’ I have always done everything that British people do”. In his long ordeal of resilience, our 24-year old man (at the time of interview on 12 June 2015) described his difficult struggle as an asylum-seeker in the UK, simultaneously challenging the dominant notion of British nation, refugee integration and victimisation of Black asylum-seekers from the global South.

He is not the only one who talked about resilience alongside their trauma. Several research participants including asylum seekers, refugees, in this case those already granted asylum, and undocumented migrants from Bangladesh, Morocco, South America and Syria spoke up. All participants are non-European, and three are men and two women. Each of them have challenged the dominant notion of Britain arguing that the “nation is not as open to immigrants as they claim to be”. The point which was made by Manobir, a 28-year old Bangladeshi-born male asylum-seeker who moved over to the UK in 2014 in the face of religious persecution, reminds us that Britain is hostile towards any refugee regardless of their religion. Most participants supported Manobir’s statement, except one from Syria who said that he felt welcomed on his arrival in 2016. He also noted that is, “probably, because I was carrying important visual documentation which the media in the UK found quite useful to understand refugee journey from the middle-east.”

For this research, we have also conducted consultations with communities and third sector advocates in the field of forced-migration for three months before the data collection has begun. The expats and community advocates have supported the arguments by most of our participants who gave oral testimonies to preserve in the digital archive, called the Living Refugee Archive. The Living Refugee Archive has been created to preserve the testimonies and materials collected through outreach and consultations undertaken for the project. The notion of decolonisation used in our project is that of Archie Mbembe’s which suggests that when we produce knowledge and archive information we should refuse any pre-existing paradigm to avert shaping and re-shaping of data. Our research in fact draws on “knowledge from below,” a notion that considers the knowledge of refugees as more important than the knowledge produced by established researchers and expert who reinterpret data following a pre-existing paradigm.

In drawing on knowledge from below we argue that the oral history told by refugees themselves is an ultimate truth in a particular socio-political and historical context, and that we should not distort ‘that truth’ because it does not require to be reinterpreted by any means. We see the perceptions, understandings, interpretations, and explanations of the displaced and undocumented migrants about their life-events and lived experiences are final analysis. In our view, despite some differences between Moroccan culture and British culture such as food, dress, language and religion, the narrative of our Moroccan participant is factual because there may exist similar “values” such as “using same cutlery, love to nature, craving for travel and adventure, thinking differently and liberally,” in Morocco which mainstream scholars of Moroccan history might have overlooked. We consider this account of a displaced Black Moroccan as accurate.

As well recognising the hidden refugees and archiving moving memories of the displaced, we acquire a non-essentialist intersectional approach as appropriate to illustrate how the diverse voices of refugees and migrants of different ethnicities and ‘race’ are often marginalised or left un-heard within the refugee archive and migration research, and even deliberately overlooked in favour of the dominant narratives of the nation. It is important to be aware of post-colonial theories – in this case the notion of Gayatri Chakravorty Spivak (1988/1994) – and non-essentialist feminist theories that argue that the construction of “otherness” and the process of “othering” of certain groups and individuals in a society need to be analysed inthe light of intersectionality of ethnicity, race, class, nationality, gender, and sexuality.  This for instance informs the analysis of the stories of resilience of non-White asylum-seekers, refugee women, refugees with disability, and young people.

Our 37-year-old undocumented female migrant from the South America who has an Irish-Jewish background, Neela, told that London is “Much better as a ‘home’ and a place to live in for her.  Neela’s statement was supported by four other participants who suggested that the diversity, democracy, freedom of expression and multicultural aspects of the city of London can make any refugee feel like “home”. This was recognised by Shahosh too who notes, “It is a politically diverse ‘place’ which allows me to participate in activism, to share views openly and to express solidarity with others. London offers a politically diverse community which is what I needed to live.”

Even if this may not be the same for all refugees in the UK, Neela reminds us the gendered aspect of migration. She said: “I can walk alone on the street at night. I could never do this in my home town in America. […] It was very violent to women. You have to carry a knife when you go to date […] hmm […].” Neela has moved over to the UK as an undocumented migrant for 17 years. Her statement is momentous as it demonstrates that our knowledge about some “developed” countries like the United States is inadequate. At the same time, Neela’s account reveals a gendered history of South American society and brings in fresh insights on women’s experience in displacement and gendered violence in a developed country that can challenge the pre-existing history of American culture.

The diverse narratives of non-EU migrants and refugees are informed by their varied social locations, different positioning, experiences and that of original history of displacement. These narratives of participants substantiates the argument that the meaning of home to a refugee in the UK is “multiple, complex and in process” as Helen Taylor argued in her book on Refugees and the Meaning of Home in 2015.  However, the home these people hope for is often denied to them, and they are being constructed as “others.”  As we have seen in this study that experiences of refugees and migrants vary based on their ethnicity, nationality, and geopolitical situation, and lived experience of EU and non-EU refugees and migrants can be varied.

The stories told by the participants in this research, however, have been preserved in undistorted form as refugee-history and spoken text of those on the margins. We believe that the use of oral history methodology, combined with the mode of knowledge from below and experience-centred narrative, has enabled the preservation of refugee-voice as much as it enhanced the construction and documentation of refugee-history. Much of the collated oral history does not reflect on any pre-existing history, models, or modes of knowledge in the field.

By LivingRefugeeArchive|2019-10-03T14:55:54+01:00October 1st, 2019|Archives, Articles, Conferences, Living Refugee Archive|Comments Off on Documenting untold resilience and moving memories with displacement: Narratives of asylum-seekers and refugees in Britain