A Film by Debra Kellner 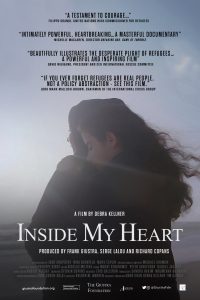 Now more than ever – in a world where over 68 million people have been displaced from their homes by war, persecution, and violence – it is crucial that we foster empathy and compassion and bring people together to open their hearts to newcomers in their communities.

Inside My Heart, a film by Debra Kellner chronicles the lives of three families who were forced to flee Syria and Afghanistan at the peak of the refugee and migrant crisis in 2015. In the wake of witnessing unthinkable atrocities and having the lives they’ve known wrested away, these mothers, fathers, sons, and daughters exhibit remarkable resilience as they fight for survival.

The fly-on-the-wall approach to filming reveals the immense emotional anguish of the families as they undertake their journeys to find safety and new homes over the course of three years. They travel through countries where they do not speak the language, where their welcome is conditional, and the rules and policies are ever-changing. In bearing witness to their stories, the global refugee crisis shifts from a set of statistics about distant places to a very human struggle for survival. Any of the people featured in the film could be any one of us.

The Giustra Foundation has covered the license fees and is offering the film to anyone who would like to host a screening. They have developed resources including a discussion guide/action toolkit and lesson plans for classrooms. Host a screening of Inside My Heart with your community to share some of the stories of those caught in the refugee crisis in an effort to create greater understanding and compassion.

“In a world where desperate refugees are used as pawns for often violent political ends, this poignant film shows us that refugees are ordinary mothers, fathers, boys, and girls – people like you and me, who usually uplift and enrich their new communities.” –Christiane Amanpour, CNN Chief International Anchor

At the peak of the refugee and migrant crisis, three families are forced to flee war-torn Syria and Afghanistan, seeking safe harbour on foreign 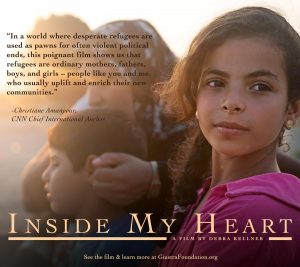 shores. In the wake of witnessing unthinkable atrocities and having the lives they’ve known wrested away, these people – mothers, fathers, sons, and daughters – exhibit remarkable resilience as they fight for survival. The fly-on-the-wall techniques utilized in the film allow us to witness the families’ frustrations over the course of three years and better understand the hopes they have for their children.

Demonstrating the same compassionate eye exhibited in her celebrated photography, director Debra Kellner delivers a vital reminder about the human beings who have been swept up in a global crisis involving 68 million refugees and the largest human exodus since the Second World War.

Inside My Heart – produced by Frank Giustra, Serge Lalou and Richard Copans – was supported by the Giustra Foundation with the aim of bridging the distance between those living comfortably in their country of choice and those forced to flee their homes in search of peace and stability. It serves as an artistic piece of encouragement to open our hearts to our global neighbours.

“If you ever forget refugees are real people, not a policy abstraction – see this film.” – Lord Mark Malloch-Brown, chairman of the International Crisis Group

A Discussion Guide and Inside My Heart_Lesson plans are also available for download.

Debra Kellner is a photojournalist and filmmaker who was born on Canada’s West Coast but now calls Paris home. Her photography has been published in magazines such as National Geographic, Paris Match, and Stern Magazine. She is currently working on a feature documentary set in the Chilean Atacama Desert that follows a group of astrophysicists as they try to unravel the origins of the universe.

Frank Giustra is a Vancouver-based businessman and philanthropist who traveled to the Greek island of Lesbos in 2015 to offer his assistance as thousands of refugees arrived by raft during the height of the European Refugee crisis. Much of his philanthropic work focuses on the refugee crisis and conflict resolution. He is the founder of Lionsgate Entertainment, now one of the world’s largest independent film companies.

Serge Lalou is a producer at Les Films d’Ici, one of the biggest documentary production companies in France. He has produced more than 400 films, documentaries, and feature films, including the Oscar-nominated documentary Fuocoammare (Fire at Sea).

Richard Copans is a French producer and director. He founded Les Films d’Ici in 1984 and, along with Stan Neumann, is the director of the documentary television series, Architectures. In addition, Richard has produced over 60 films.