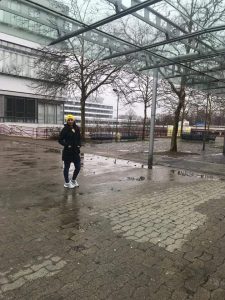 From Syria to Lebanon, and finally in Germany.

Read this is a story of our friends Bahour and her series of challenges she faced to complete her education after the war started in Syria.

I concluded my profession certificate (No: nine 9), in 2012 in Aleppo Syria and came out from one of Excellence students and I have managed to access to one of the schools in my dreams after many exams take place.

After a period of time, the clashes have stopped at some point for us, the road was blocked and some of the roads became longer.  Sometimes my father takes me to the school, but the situation getting worse and a lot of trouble things happened. Then we have to change our house more than three times, though, we become an internal displacement as we left our village Daiati and we moved to the north part of the country and we settled over there for three months.

However, through this period of time, there is no study and the basic things for the living conditions were not available at all. Though, we were forced to leave Syria and being a displacement people in Lebanon.  When we first arrived in Lebanon we were settled down in Aramoun. Of course, everything was difficult because it was a new beginning for us and for everything.

I have applied for the school with my papers, but unfortunately, I have got rejected, because of the level of my English and the lack of missing some of my official documents.  After a while, we moved to the capital city Beirut and the situation of the house was bad, but the opportunity to get access to the school was greater for me.

I have applied again for many schools in Beirut, but as usual, the answer was coming to me with reject and the sentence that was always delivered to me says that if we accept your application will affect the level of the school.

After very long research, I have got enrolled at the principal’s school, Rene Mouawad; I was accepted with the condition of being able to start and adjusting the new curriculums.

After a month later I have received my result as grade number seventh in my classroom because I haven’t got used to it. Therefore, I have to give more time for my studies, multiplied effort more than three times with my fellow colleagues that were tried hard to help me in English because it was a very big problem for me, and I have to translate the whole text as the word for words translation.

In addition to that, after the period of intensive study, I think my hard work pays off and I have received an excellent result of being first or second in my classroom.

Thereafter, I have graduated from the school and I have got access to the Faculty of Science in Beirut, our dad travelled to Germany and after three months later we have received our visa to travel to Germany to live with him.

We arrived in Germany in the earliest of 2017, and the biggest challenge was to study German as quickly as possible after a hard-working in my study around ten months and a half and that was the last level of the language!

Of course, it was a very difficult time, not only for access to the university but also, it was important for me to finish my study as quickly as possible.  Then after a year and a half of after my arrival in Germany, I have taken the required exams to access the university and I have got an offer in a top University of Germany faculty of Biochemistry.

It was much tufted at the beginning of my study, but when we worked as a group of different backgrounds make easier for me and my grades were absolutely fabulous.

Did you have an experience similar to Bahour?  If so, please do share it with us in the comments.