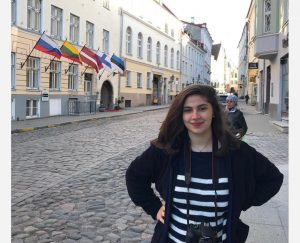 My journey from a camp to Europe was a very tough one. For 18 years, I have been living in a Palestinian refugee camp in Lebanon called “Ein Al-Helweh”. This camp is notorious for its continuous clashes between its political parties and factions and perhaps secretly, it is known for killing its children’s dreams. Ein Al-Helweh with all its flaws empowered me to see what is beyond the walls surrounding it and to break borders and barriers between countries to finally settle in Europe.

This road was full of hardships as I have fortunately gotten a scholarship to study at the University of Malta. Honestly, I have always wanted to leave Lebanon since refugees’ future there is uncertain and depends on the political climate in the region with all its turmoil and danger, however, I always had in mind the idea of coming back and contributing for change. For that, I chose to study abroad Social Work since this field of studies gets you closer to marginalized groups and since I am one of these groups, I may be able to offer more help.

The up-rootedness that placed Palestinians in the camps has evidently limited and blocked them from seeing the outside world, especially girls since our society is clung to worn-out, sexist traditions and ideologies. From what I have experienced, Palestinian girls in Lebanon face double the oppression: being refugees and girls. Nevertheless, this never stopped me from dreaming especially after graduating and having a gap year between my high school and university year due to my visa refusal because I was a minor. At that moment, everyone seized the opportunity of stopping me from traveling because I am a girl, but I never gave in. I went to volunteer at an NGO and I applied again to the university for the next academic year and after many attempts, my visa got accepted and I flew the next day to Europe.

These hardships always pushed me forward, never backwards because I believe that education, especially for refugees, is the first and last resort in contributing to the prosperity of a country.